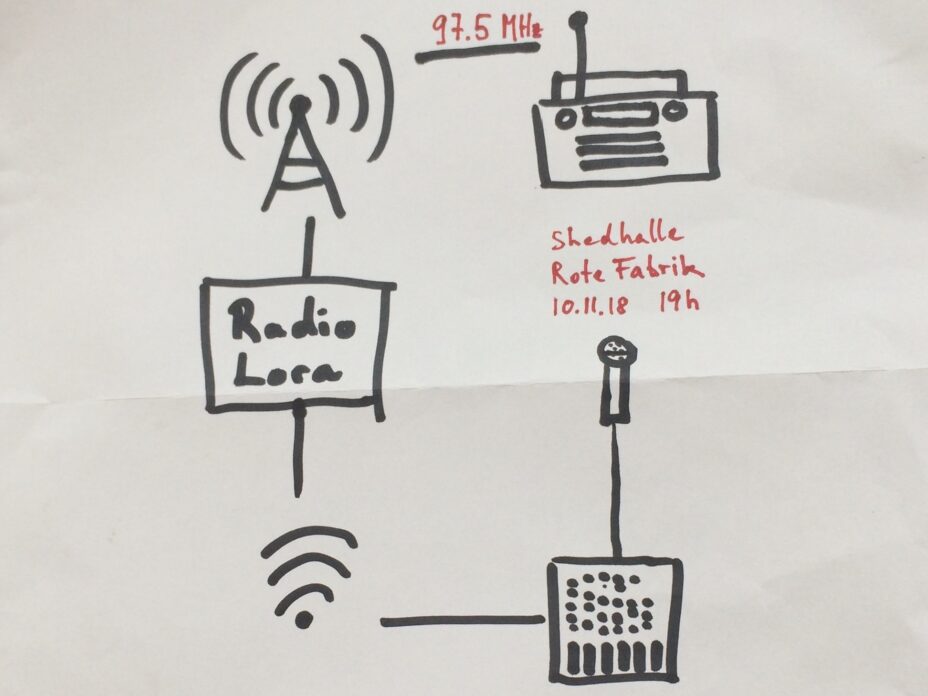 In his ongoing work about feedbacks Simon Grab adapted Alvin Lucier’s work «I am sitting in a room» for the Festival «Reclaim the radio» in the Shedhalle Zurich, celebrating the 35th anniversary of the community Radio Lora Zurich.
Simon Grab is sitting on the small stage in the Shedhalle, a former industrial hall, speaking a sentence into the microphone, which is streamed to the radio studio, broadcasted on air via antenna, and then coming back through a small receiver on stage, being captured again by the microphone.
The delay of the stream is used like a tape machine. In the self-repeating process the piece starts generating a droney feedback layer making audible not only the frequencies of the room but also the signal path of the broadcasted sentence.

* «Bitte drehen sie ihr Radiogerät etwas leiser» is a common sentence of the radio host asking incoming phone call guests to turn down the volume of their radio receiver because it creates unwanted feedbacks.

«I’m sitting in the Shedhalle of the Rote Fabrik, transmitting my words through a microphone via an online stream to the Radio Lora studio, from where the sound is sent to the antenna on the Uetliberg, broadcasting the signal over the air to my small radio receiver back into the rooooooooooooooooooooooooom»